KFC Goes on Offensive Over Potholes 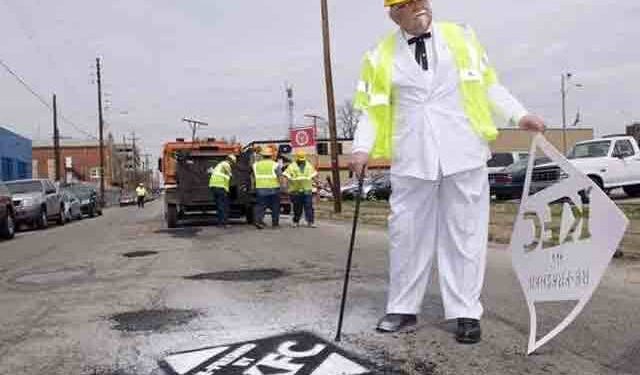 Colonel Sanders is not a man to be messed with and he is also a man who likes a smooth ride when he is taking his chicken wagon for a ride. The reality in fact, is that KFC are recognizing the leverage which they can gain through the fixing of potholes in their local areas, and how they can use that in order to paint advertising slogans on the asphalt roads. This will begin in Louisville, Kentucky where the fast-food giant will be carrying out repairs on a vast number of potholes. In return they will be able to paint their commercials onto the road. 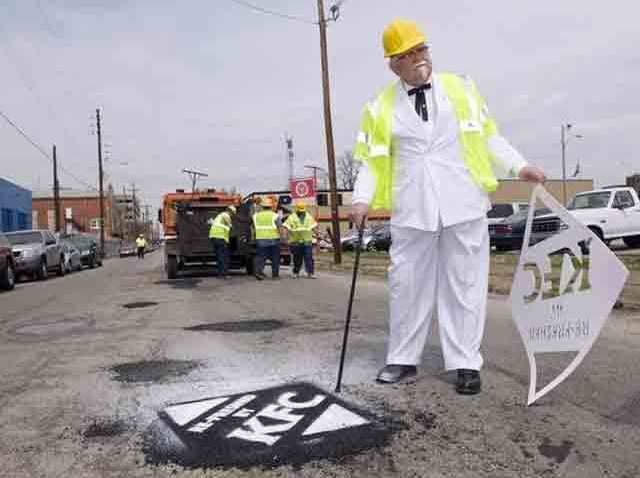 My first thoughts on this were that it is a genius plan, something which will help the company to win hearts and minds of residents who are sick of complaining about potholes. On top of this the company then get free advertising, which is sort of like double marketing. The biggest negative here however, is that the US have left themselves open to this because of their great failure to fix the most simple of issues, a pothole

The global fast food giant has already sent out letters to city officials around the country, asking them to describe their pothole problems. Whichever four candidates are deemed most worth will join Louisville in receiving “free” repairs. Transportation officials from Chicago, for one, didn’t immediately dismiss the idea. “We’d be glad to discuss this with the firm and see if it fits with Illinois requirements for quality, safety, timeliness and cost-effectiveness,” said Illinois DOT spokesman Marisa Kollias.

This marketing campaign, both in terms of the pothole plan and the wider plan from KFC is centered around the theme of a ‘refresh’. The TV ads have already began for this campaign and there is little doubt that the in the marketing division will be rubbing their hands with joy after they managed to get the green light for this novel and pretty unique plan.

The irony of this story in particular is that the location of the first pothole fixing drive, Louisville, is the place which has pretty much wasted $4 billion on one of the worst road building projects that the nation has ever seen. We do have to wonder whether the colonel has had a word with the local government and on top of the potholes managed to come up with an idea that will repair their disastrous plan to build new roads throughout the city.

One thing that is for sure, we are actively writing and, in a way, promoting the fast-food giant. You do get the ones of course that this is exactly what they were hoping for when they came up with this fantastic plan to show the US government that they the fast-food retailer is able to take better care of the roads than they can.

Building A Subway Is 96 Percent Cheaper ...

What to know about Tesla’s Hyperloop